Precise and sensitive polarimetry forms a cornerstone for EST. For this reason, we have analysed the polarimetric characteristics from the very beginning in the conceptual design process, both in terms of the optical design (with its Adaptive Optics and Multi-Conjugate Adaptive Optics systems), the location of the calibrators and modulators, as well as calibration strategies and the choice of coatings and detector types.

Other requirements that have been defined are: 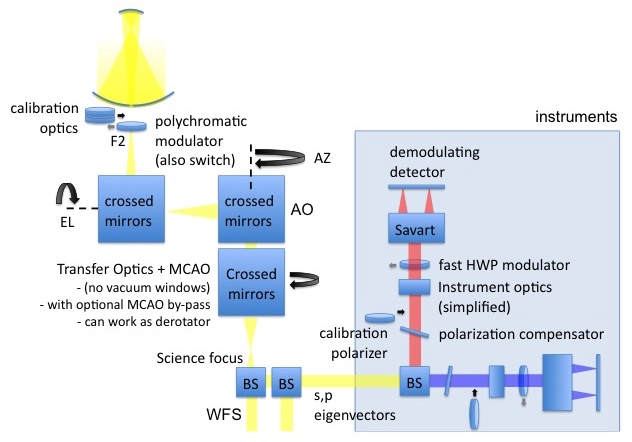 Just after the axis-symmetric mirrors M1 and M2, close to the instrumental polarization-“free” secondary focus F2, space is reserved for calibration optics and modulators, which can be slid in and out of the beam. Modulators can be of any type, optimized, for example, for efficiency or wavelength coverage, a polychromatic type with switching capabilities being one option. The complete optics train up to the science focus, including both elevation and azimuth mirrors, and the AO (Adaptive Optics) and MCAO (Multi Conjugated Adaptive Optics) system, is polarimetrically compensated. After the science focus, all optical elements are statically aligned, with the s- and p- planes being the eigenvectors of the total system after the science focus. The analysers are placed at each instrument and send the light as dual beam to the demodulating detectors. A second modulator can be located also at instrument level, as well as extra calibration optics and/or polarimetric compensators. The great advantage in also locating polarimeter components at each instrument is flexibility.

The main mirror and the secondary mirror form a Gregory system and, as such, are rotationally symmetric. Therefore, they do not introduce any instrumental polarization: all locally introduced polarization due to an inclined mirror surface, e.g. on the rim of M1, cancels out due to the rotational symmetry. Due to the arrangement of M1 and M2, the secondary focus is still polarization free. Here the polarization package will be located, containing both modulator and calibration optics. It is the preferred place for a large aperture solar telescope. In order to eliminate the effects of seeing it is preferable to measure the various polarimetric states within the time that the seeing changes. For this reason fast modulation and fast readout is to be preferred.

The aim of the optical design of EST is to get the lowest possible instrumental polarization, which is a strong requirement for accurate measurements. Variations in time are particularly to be avoided since calibration quickly becomes a time-demanding (and thus expensive) task and reduces the calibration accuracy. Obtaining low instrumental polarization is realized by:

The baseline optical design of EST consists of 14 mirrors. The layout of the optics is such that pairs of mirrors are orientated in a way that they compensate each other’s polarization. For the fold mirrors with 45˚ incidence angle this occurs when the incidence-reflection planes are perpendicular. Since different parts of the telescope rotate at different rates (elevation axis, azimuth axis, de-rotator unit), compensation for the system as a whole also requires that all subsystems in themselves are compensated, which is also included in the optical design. It makes the telescope polarization time invariant to first order. In order to maximize the throughput of the telescope (hence also the polarimetric sensitivity), adding extra compensation mirrors (with no other function) is seen as a drawback. For the current baseline design only one extra mirror is needed to achieve complete compensation.

After the science focus, all mirrors can be statically aligned according to their individual eigenvectors. The modulator in front of the instruments transfers the polarization to be measured into the eigenvector of the optical train, which creates a very robust, insensitive polarimetric system. The (unknown) instrumental polarization in the (s-, p-) directions cancels out after a regular beam-exchange with the modulator.

In the dual beam concept (and, when possible, where no strongly polarizing elements exist in the optical beam), it is easier to have the analyser just before the detector(s) in order to avoid complications with the AO optics and instruments, as otherwise two beams have to travel through the system. Separating the modulator from the analyser and putting it much more in front (i.e. in F2), has the great advantage that the instrumental polarization of all optics behind the modulator has a lower impact on the polarization accuracy.

By using modulators at various locations in the optical train, which switch the sign of polarization periodically, and then subtracting sequential images, spurious polarization signals of parts of the telescope can be subtracted. The modulator in F2 could act as a “switch” to change the sign of real polarization with respect to instrumental polarization. When combined with the beam exchange method, the real polarization then follows, together with “switching” from a “triple difference”.

The main calibration unit will be located at the F2 location, which is the ideal place just after the symmetric M1 and M2 to be able to calibrate the maximum number of optical components. The procedure is not different from other telescopes. The calibration unit defines the performance of the polarimeters by generating defined states of polarization.