EST is a 4.2-metre class solar telescope with an on-axis Gregory configuration, aiming at superb polarimetric performance. It will have a main instrumentation station at the Coudé focus with three types of instruments, each one composed of different channels to observe different wavelengths: broad-band imagers, narrow-band tunable filter spectropolarimeters and grating spectropolarimeters.

The telescope includes active and multi-conjugate adaptive optics integrated in the telescope optical path between the primary mirror and the instrument focal plane in order to maximize the telescope throughput and provide a corrected image at the Coudé focus for the three types of instruments simultaneously. The active optics system is composed of M1, M2 and different mirrors of the optical path. The adaptive optics system is composed of a fast tip-tilt mirror and a pupil deformable mirror (DM), and up to four DMs conjugated at different heights. 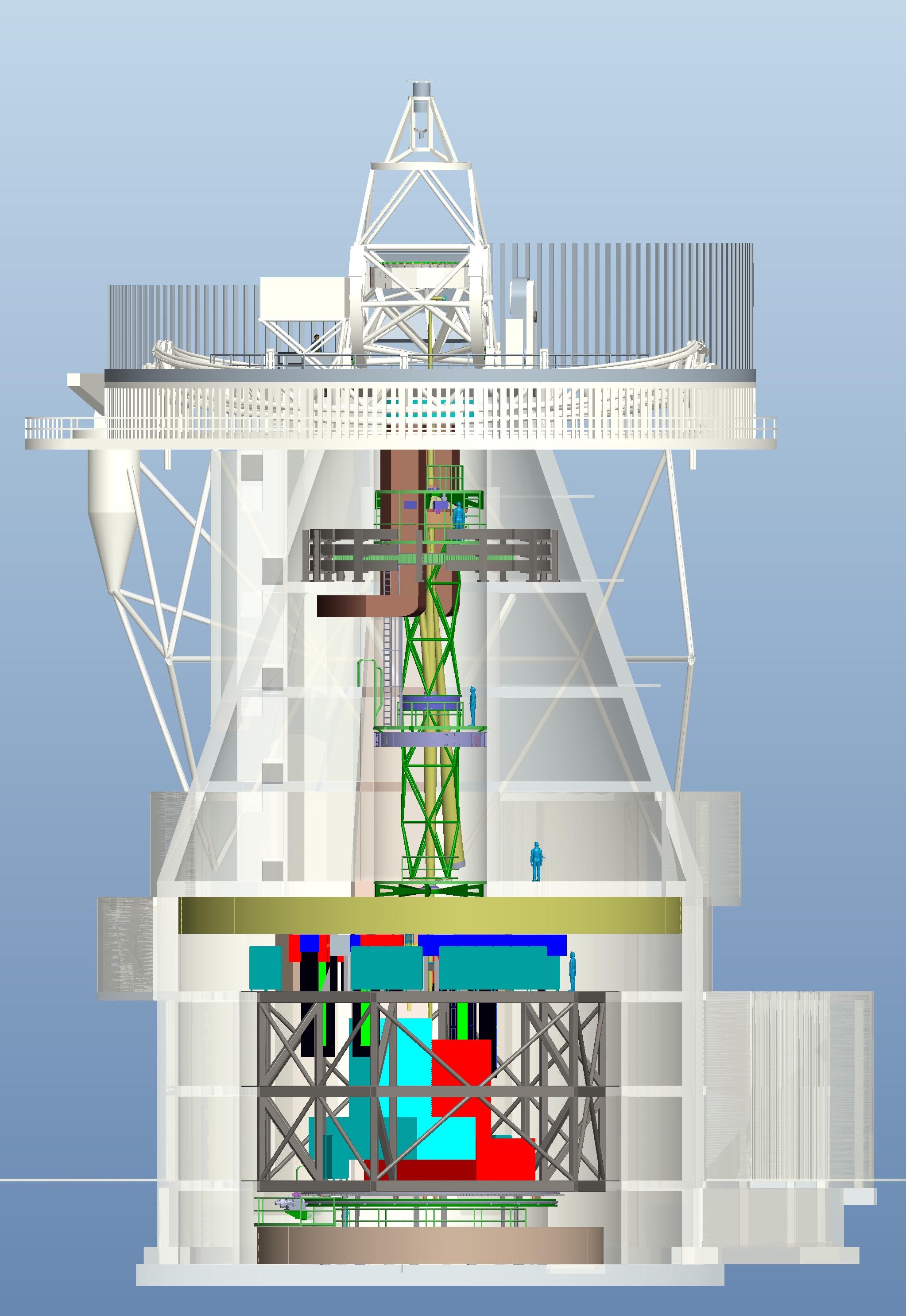 The optical design is based on an aplanatic Gregorian telescope with three magnification stages which finally yield an f/50 telecentric science focus. The design includes 14 reflections in total, arranged in pairs with incidence-reflection planes perpendicular to one another in order to compensate their instrumental polarization. This configuration allows the maximum number of capabilities: polarization compensation (Mueller matrix of the optical design ~1), integrated optical field de-rotation capabilities, telecentric design, collimated beam at AO system and four MCAO DM mirrors conjugated at different heights.

The telescope mechanical configuration is alt-azimuthal given that it allows a simpler and more compact system, with better primary mirror air flushing, making it possible to achieve a polarimetrically compensated optical design. The configuration of the telescope structure is determined by the optical layout. The elevation axis has been placed 1.5m below the M1 vertex in order to facilitate M1 air flushing, also allowing space enough for the M1 cell and for an adequate placement of the transfer optics train vertically from the telescope to the Coudé focus where the instruments are placed. The unusual configuration of the elevation axis below M1 produces a large unbalanced weight around the elevation axis, which is compensated by the structure below M1. In addition, the azimuth and elevation axes are decentred with respect to the telescope optical axis because the optical path is folded in an asymmetric way to produce a polarimetrically compensated layout, with a telescope Mueller matrix that is nearly independent of the telescope elevation and azimuth angles, and for all wavelengths.

The image rotation will be compensated at the Coudé focus in order to feed the instruments with a stable image. The proposed baseline to compensate the field rotation is based on an optical de-rotator integrated in the telescope optical path. The seven mirrors of the transfer optics between the telescope and the Coudé focus, including the MCAO DMs, are arranged in way such that their input and output optical axes are coincident with the telescope optical axis. This arrangement allows this system of seven mirrors to work as an optical field de-rotator, rotating these mirrors around the optical axis at an appropriate rate. In addition, this design is also compensated under a polarimetric point of view, without introducing additional flat mirrors in the optical path. The arrangement of the transfer optics as a field de-rotator avoids the necessity to use a large rotating platform for the instrumentation, which is advantageous in terms of simplicity, instrument stability, cost and flexibility to allow future instrumentation upgrades. The alternative of providing a rotating instrument platform in the Coudé room to compensate the field rotation has also been developed during this design study, but was not preferred because of the limitations it implies for the instrumentation.

Given the alt-azimuthal configuration, a Nasmyth platform will be provided as an auxiliary focal station for a medium infrared or ultraviolet instrument that will be fed directly with telescope light without passing through the complete transfer optics. Fast tip-tilt and focus correction capabilities will be provided additionally to M2 in order to correct these effects at the Nasmyth focal station, which cannot take advantage of the correction of the AO system placed in the Coudé path.

The baseline telescope enclosure is completely foldable. This option has been selected since it maximizes natural wind flushing of the telescope, improving the local seeing conditions with less effort than with a conventional dome. The conventional dome requires a cooled skin, combined with many vent openings, requiring a complex and demanding installation. An important advantage of the completely foldable enclosure is that it allows the use of a reflecting heat rejecter at the Gregory focus, while with a conventional dome, it is necessary to absorb the heat inside the dome. The drawback of the open-air configuration is the higher wind effect on the image quality produced by wind shake on the telescope structure and wind buffeting deformation of the primary mirror. The wind effect has been taken into account from the beginning of the design, maximizing the stiffness of the telescope structure and primary mirror support, improving the bandwidth of the telescope drives, and providing fast tip-tilt and focus correction capabilities to the secondary mirror. The residual errors from wind effect can be corrected by the deformable mirrors of the AO system, although it is necessary to keep residual wind errors limited in order to avoid overloading the AO system. Additionally, a shield is proposed to reduce wind effects.

A conical shape is proposed for the tower, in which the upper concrete part has a reduced diameter. The enclosure is supported with a transparent framework structure, to reduce the air obstruction and the turbulence at the telescope area. The optical layout is arranged on a tower height of, approximately, 33-38m between the base of the Coudé laboratory and the telescope platform, which is adequate for reducing the ground layer effect on the local seeing conditions.

The EST facilities will include an auxiliary full disc telescope that will be used to give the observer a global context of the solar activity and for precise coordinate measurements.

The operation of the EST infrastructure, as well as the supervision of all its sub-systems as a whole, shall be carried out by an integrated control system, which will be characterized by a distributed, object-oriented architecture and a common software employed in the entire system. The EST control system shall also provide efficient management of the data and metadata produced by the facility, and their transmission from each sub-system to a real-time repository, as well as to users and to temporary and permanent archives.