The design of the optical system of EST is constrained mainly by the science requirements. However, there are also some fundamental requirements that drive the design:

General description of the optical system

EST will have an on-axis Gregorian configuration in its main telescope to achieve, after two additional main optical subsystems, a diffraction-limited Coudé Focus in a spectral range from 0.39 µm to 2.3 µm that also shows a good polarimetric performance. It will supply a main station with three types of instruments (broad-band imagers, narrow-band tunable filter spectropolarimeters and grating spectropolarimeters) each one comprising different channels to observe different wavelengths simultaneously.

The telescope includes a multi-conjugate adaptive optics system that is integrated into the telescope optical path. This provides simultaneously a corrected image at the Coudé Focus for the three types of instruments mounted on the instrument platform.

EST can be divided into three main subsystems (see Figure), where each one has a relative movement with respect to the others: 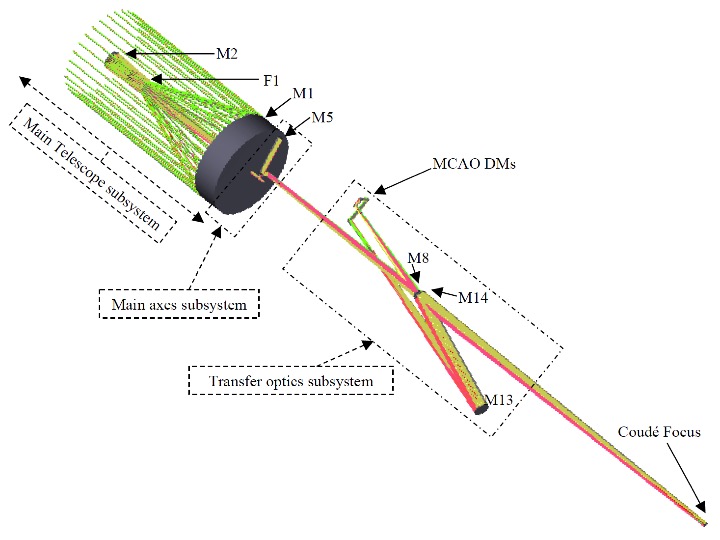 EST will have active optics in open and closed loop fed, respectively, by the telescope behaviour model and by the measurements of two wavefront sensors. The latter, which also closes the AO loop, are located before and after the transfer optics subsystem reporting the Science Coudé Focus performance and the correction capabilities of the active and adaptive elements.