The transfer optics includes all the optics between the M3 and the instrument focal plane at the Coudé focus. In the current optical design, mirrors M3 to M7 are located on the telescope structure, defining the telescope main axes, while mirrors M8 to M14 are distributed in a long chamber below the telescope level. This chamber is a cylindrical volume of Ø5´25 m3, approximately, enclosed by the concrete pier, where the optical path has a length of approximately 70 m. 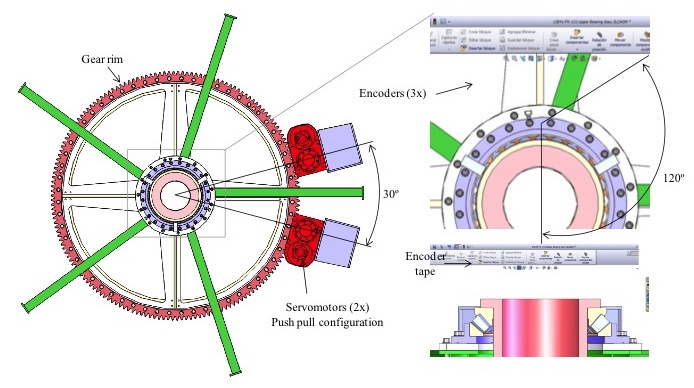 Mirrors M8 to M14 are arranged such that the input and output optical axes of the chamber coincide with the telescope azimuth axis. This arrangement allows this system of seven mirrors to work as an optical FoV de-rotator, rotating these mirrors around the optical axis at the appropriate rate.

The arrangement of the transfer optics as an FoV de-rotator avoids the necessity of providing a large rotating platform for the instrumentation, which is advantageous in terms of simplicity, instruments stability, cost and flexibility to allow future instrumentation upgrades.

Arranging the transfer optics as an FoV de-rotator, the mirrors composing the field de-rotator rotate at a different rate than the mirrors supported on the telescope structure. In this case, a differential rotation is produced during the telescope operation between the AO pupil DM (M7) and the DMs composing the MCAO system (M9-M12). The effect of this differential rotation on the AO performance has been analysed and considered minor if each DM keeps the orientation of its actuator pattern with respect to its respective WFS. Keeping the orientation of each DM with respect to its WFS is compatible with the performance of the transfer optics as a FoV de-rotator, by providing additional optical de-rotators in the WFS.

The proposed design for the transfer optics FoV de-rotator is based on an open framework structure Ø3´20 m3, approximately, connected to the concrete pier at the upper end and guided at both ends by roller bearings. Mirrors M8 to M14 are attached to the rotating structure.

Considering the limited diameter of the required bearings (Ø500 mm approx.) and the limited weight of the rotating structure, roller bearings are proposed for simplicity instead of hydrostatic bearings. A self-aligned spherical roller trust is proposed at the upper end to support axial and radial loads and a radial roller bearing is proposed at the lower end to support radial loads only. This bearing arrangement provides an isostatic configuration which facilitates the system alignment and which allows differential thermal expansion between the transfer optics structure and the concrete pier without overloading the system.

The drive proposed for the transfer optics de-rotator is based on a pinion-gear system with two preloaded servomotors to avoid backlash. Pinion-gear is proposed for simplicity and cost, although a direct drive alternative is also feasible. The drive unit is integrated at the upper end of the system, where the system is supported. Considering that the transfer optics de-rotator is located in a protected environment inside the pier, not affected by external disturbance, pinion-gear is a feasible solution, even if this has a lower dynamic performance when compared to direct drives.

The system shall include a cable wrap composed of cable chains to rotate the cables corresponding to the DMs (M9-M12) and coolant hoses needed for the mirrors.