Magnetic fields play a fundamental role in the formation and eruption of solar filaments, strongly influencing their ability to emerge and become coronal mass ejections. However, a reliable characterization of their magnetic properties is very hard to achieve with current telescopes, and scientists expect the unprecedented polarimetric sensitivity of the European Solar Telescope will help them get better results. A post written by Dr. Andrés Asensio Ramos, from Instituto de Astrofísica de Canarias (Spain). 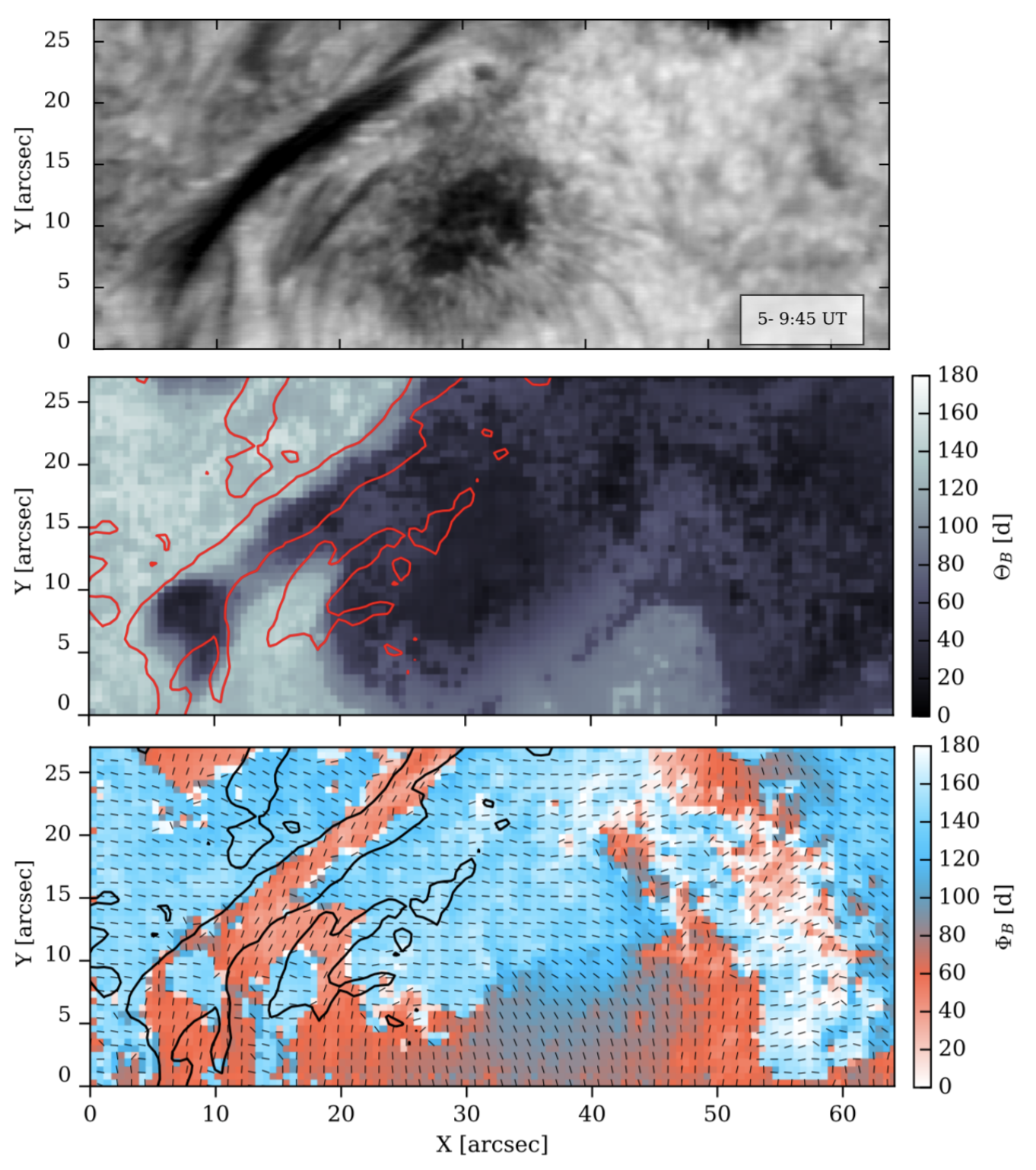 Solar filament observed in the He I 10830 Å triplet at the GREGOR telescope. The top panel shows an intensity image. The filament is the dark band extending from the lower right to the upper left, next to the sunspot. The other panels show the three components of the vector magnetic field in the chromosphere: the field strength (second panel), the field inclination (third panel) and the field azimuth (third panel), as inferred from an inversion of the data. The contours mark the position of the filament. / Image: Díaz Baso, Martínez González & Asensio Ramos, 2019, A&A, 625, 128.

Solar filaments are cool chromospheric plasma structures embedded in the extremely hot and less dense corona. They appear dark when seen in absorption on the disk. At the limb, they look like diffuse bright clouds as they scatter light from the underlying disk, and are called prominences.

Determining the magnetic properties of prominences, however, is not straightforward since there are only a few spectral lines with sufficient opacity to sample the chromosphere. In addition, because of their wide and high formation region, those lines require complex modelling. The neutral helium (He I) triplets at 10830 and 5876 Å present a good compromise between magnetic sensitivity and complexity of the numerical modelling. The He I 10830 Å multiplet in particular has several advantages: it can be easily seen in emission in off-limb prominences or in absorption in on-disk filaments and is sensitive to magnetic fields from tenths to thousands of Gauss thanks to the joint action of atomic level polarization, the Hanle and Zeeman effects.

Despite their usefulness, the polarimetric sensitivity needed for a reliable characterization of the magnetic field using these lines is very hard to achieve with current telescopes. Long integration times are needed, so that a map of a filament unavoidably produces a static picture of a very dynamic structure. The European Solar Telescope will provide the photon flux required to measure the polarization in two-dimensional fields of view in the He I multiplets, with enough temporal cadence to capture the time evolution of the field.