Observing highly-dynamical structures in the chromosphere is key to understand the transport of mass and energy to the upper layers of the solar atmosphere. A post written by Dr. Ricardo Gafeira, from Instituto de Astrofísica de Andalucía (CSIC). 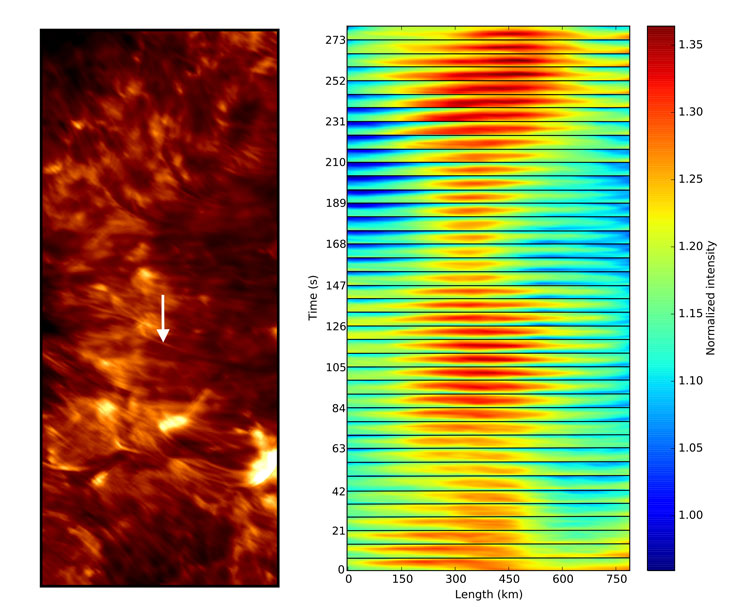 Bright elongated fibrils observed with the SUFI instrument onboard of SUNRISE observatory in the Ca II H line (indicated by the white arrow).  The right panel shows the temporal evolution of one of those fibrils. Each dark rectangle represent a single snapshot of a fibril taken with a 7s interval.

The solar chromosphere is a very thin layer just above the solar surface. Although its thickness is very small compared to the solar radius (only about 1500 km), we think it plays an important role in the dynamics of the solar atmosphere.

Using state-of-the-art telescopes and instrumentation it has been possible to observe several highly-dynamical structures present in this layer, spanning different lifetimes and sizes ranges. Those structures may be a key element in the transport of mass and energy to the upper layers of the solar atmosphere. They can also contribute to the coronal heating process, one of the most important open questions in solar physics nowadays.

Among all the types of structures observed in the chromosphere, the small-scale elongated ones (a few Mm of elongation) have attracted most of the attention of the community due to their ubiquity in the Sun and their highly dynamical behaviour. Depending on their location and individual characteristics, they receive different names, like spicules, rosettes, straws, fibrils, etc. Even if they are very similar in appearance, the relation between them is still unclear.

The image displays an example of elongated features called slender Ca II H fibrils (marked with a white arrow). We know that these structures are correlated with the magnetic field, exhibit magnetic wave behaviour, and show different types of evolution. Even with the best instrumentation available today, their formation mechanism, magnetic topology and behaviour -like the pulsating intensity variations plotted in the right panel- are not fully understood.

The European Solar Telescope will allow us to observe Ca II H fibrils and other elongated structures with high temporal and spatial resolution in multiple spectral lines. This will give us important information about their evolution and physical processes. With this information, we expect to be able to understand their role in the mass and energy transport to higher layers, their relation with other elongated structures present in the chromosphere, and their formation process.