The solar atmosphere is a plasma physics laboratory near us, one we could never replicate on Earth. A post written by Dr. Jenny Marcela Rodríguez Gómez, from the Skolkovo Institute of Science and Technology (Russia). 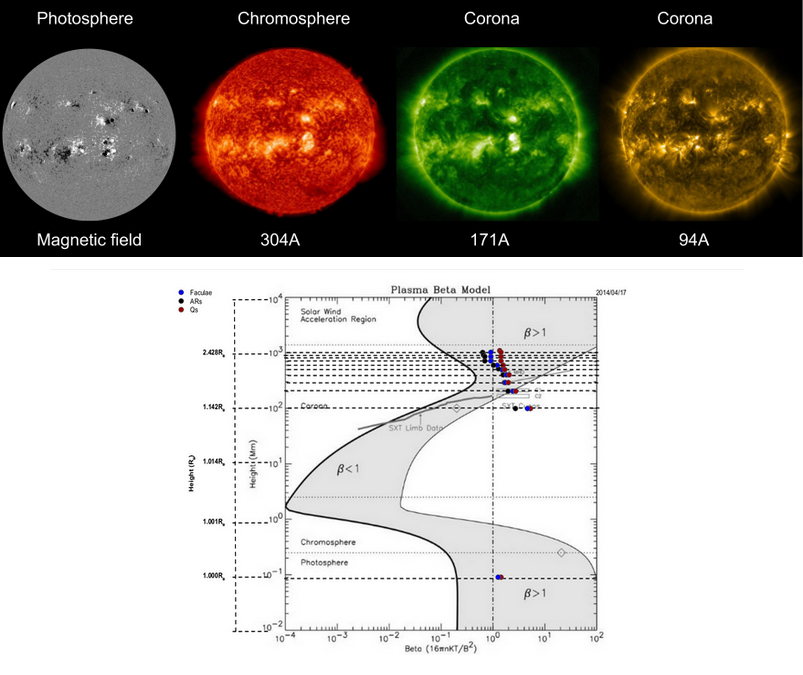 Top: Images of the Sun from the photosphere to the corona taken by the Solar Dynamic Observatory on 17 April 2014. Bottom: Plasma β values resulting from the CODET model for faculae (blue points) and the quiet Sun (red points) at coronal heights. / Credit: Rodríguez Gómez et al. (2019)

The proximity of the Sun brings an enormous advantage to understand basic plasma processes and their characteristics: the solar atmosphere is a plasma physics laboratory near us. Plasma - the fourth state of a substance along with its three main states: liquid, solid and gaseous - fills the entire universe. It is also present in the solar atmosphere where, together with the magnetic field, drives solar phenomena such as flares, coronal mass ejections, and the solar wind.

In a recent work, Rodríguez Gomez et al. (2019) calculated the evolution of the plasma in the solar corona for solar cycles 23 and 24 using the COronal DEnsity and Temperature (CODET) model. Unfortunately, it is not possible to obtain information about the plasma β in other solar atmospheric layers such as the chromosphere and the transition region using the CODET model.

High-resolution ground-based solar observations provide a unique and powerful complement to space-borne instruments, offering very precise measures of small-scale processes on the Sun. High-resolution observations like those that will be obtained by the European Solar Telescope will help us get better estimates of the magnetic field and the plasma β values in the lower solar atmosphere, and to obtain a complete picture of their variation as a function of height. Thus, they are fundamental to better understand solar dynamics.