Scientists use the term white-light flares to refer to flares whose usual line emission is accompanied with enhanced continuum radiation in the visible range. Several explanations have been proposed for this phenomenon. A post written by Dr. Jana Kašparová, from the Astronomical Institute of the Czech Academy of Sciences. 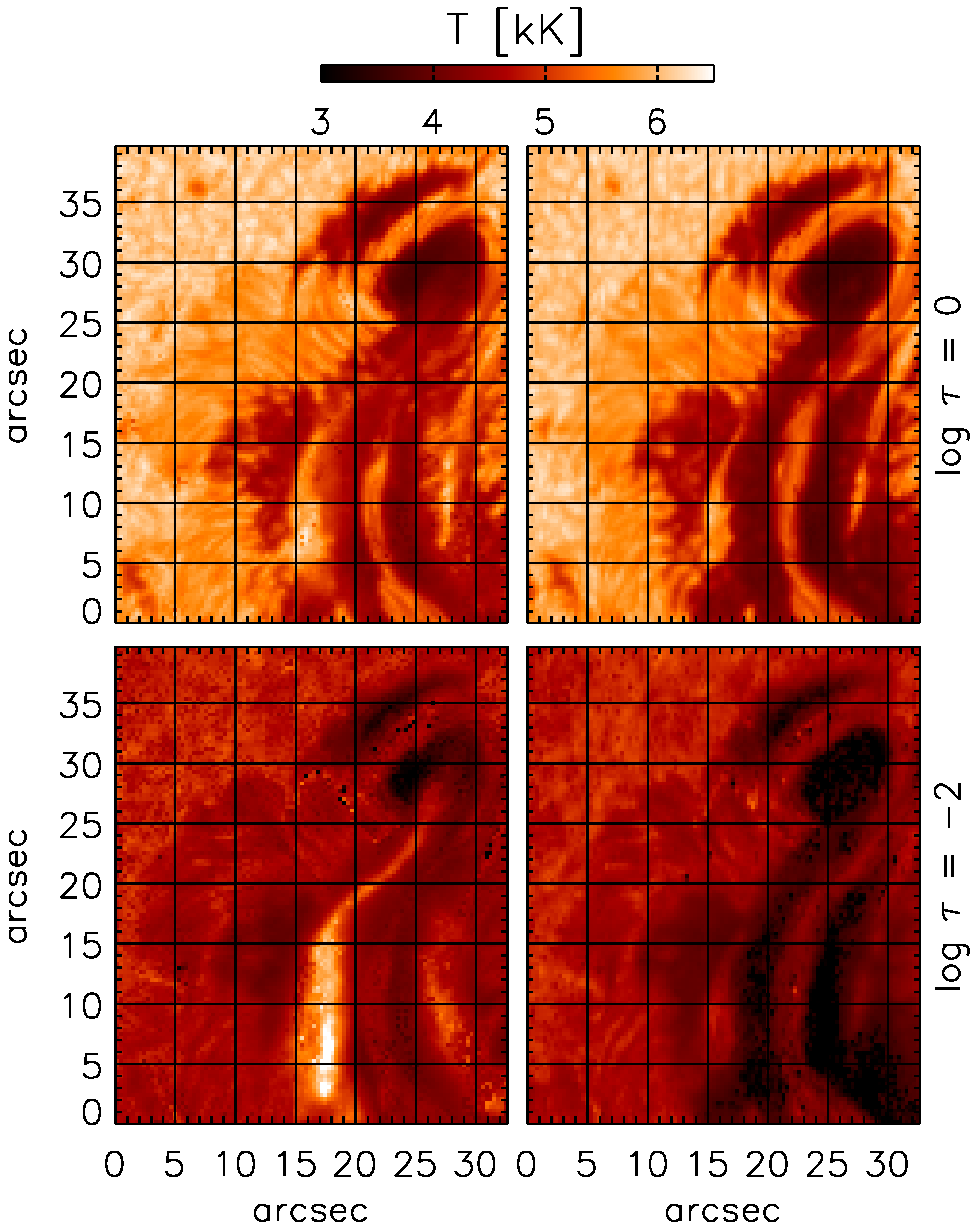 Temperature maps in the lower (top) and upper (bottom) photosphere during (left column) and after (right column) the flare./ Credit: Jan Jurčák, Astronomical Institute of the Czech Academy of Sciences.

Solar flares are a consequence of the energy release that occurs during magnetic reconnection in the corona, when magnetic fields are rapidly rearranged. A large portion of the flare energy is radiated away in a wide range of wavelengths, originating from the intensively heated atmosphere. In the visible range (between 380 and 740 nm), the usual line emission is often accompanied by enhanced continuum radiation, due to processes involving free electrons. Such flares are called white-light flares.

Several mechanisms have been proposed to explain the continuum emission of white-light flares. Each of them would operate in a different atmospheric layer, from the chromosphere to the photosphere.

Recent studies have suggested that the white-light continuum enhancement observed in solar flares may come from the chromosphere as hydrogen Paschen continuum, i.e. emission at wavelengths below 820 nm due to recombination of a free electron to the third hydrogen atomic level. Recently, unique observations of photospheric Fe I lines detected in emission during a large flare were interpreted as a result of the heating of the solar atmosphere down to the photosphere. However, it was argued that the continuum brightening originated at higher altitudes, in the upper layers of the heated atmosphere. The figure shows temperature maps of this event in the lower (top) and upper (bottom) photosphere during (left column) and after (right column) the flare.

The imaging and spectroscopic capabilities of the European Solar Telescope - EST will allow us to simultaneously detect line and continuum emission in several spectral bands, from the shortest visible wavelengths to the infrared. Such observations will provide insight into the formation and short temporal evolution of flare emission emerging from different atmospheric layers. This will help us to disentangle various contributions to the white-light flare emission and identify the mechanisms responsible for them.