Sausages on the Sun

Sausage waves (so called because the resemblance with sausage links) are produced in different solar features but, at the moment, scientists can only study them in solar pores. The European Solar Telescope's improved resolution will make it possible to look for them in smaller features, and to better understand their propagation. A post by Dr. Peter Keys, from Queen's University Belfast (UK). 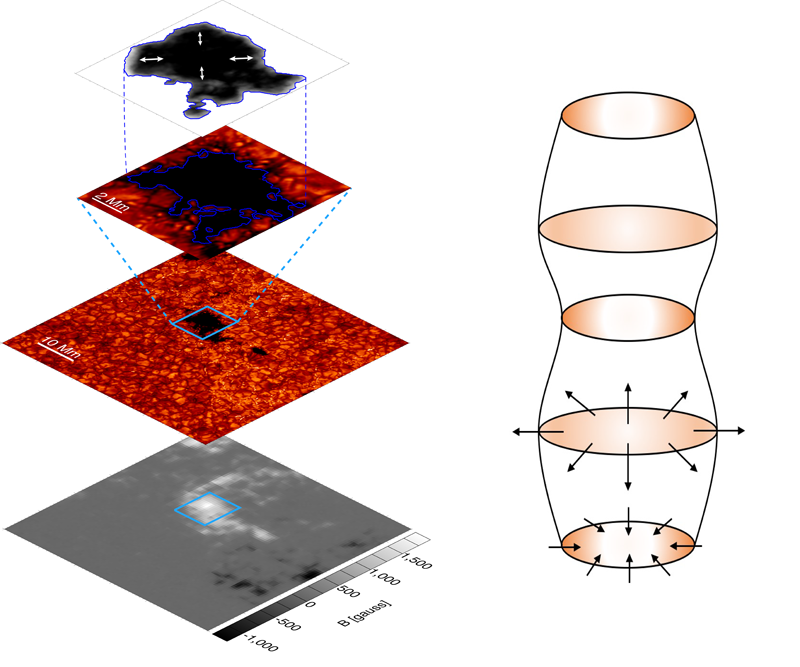 What’s the best way to cook a sausage? Fried with onions? On the barbeque? How about on the Sun? They would certainly cook quickly there! Unfortunately, we don’t search for sausages of the pork variety on the Sun. When we talk about sausages in our star, we are referring to a specific type of wave found on the Sun.

For astronomers, one of the most interesting and challenging aspects of the Sun is to understand its magnetic field. This magnetic field produces features of different sizes across the Sun. Pores, which are dark like sunspots but smaller in size (see the image above), are one such feature that we study and are great for finding sausage waves!

Waves can be observed in features like pores, with some waves produced due to the motion of the material surrounding the feature. Imagine it like a cork floating in a pot of boiling water. When the water boils, bubbles of boiling water push the cork about as the bubbles change shape. Similarly, on the Sun, the bubbling motion of the granules around a pore is enough to produce sausage waves in the pore by ‘pushing’ it from all sides. This causes an oscillation in its cross-sectional area as the size and shape of the pore varies over time. Pores extend upwards in the solar atmosphere, like large tubes or funnels. The term sausage wave comes from the fact that the variation in diameter of the tube at different heights when a sausage wave is present makes it look a bit like sausage links (see if you can see that in the cartoon below).

What does this have to do with the European Solar Telescope? Our understanding of these waves in the Sun is somewhat limited, and there are only a handful of observations of them. Pores are the smallest features we can realistically identify sausage waves in at present, however, we would like to study them in other features like magnetic bright points, which are smaller and more numerous across the solar surface. To observe sausage waves in bright points, we need better spatial resolution. Also, we really need more accurate magnetic field information in pores and bright points at various heights to understand the waves and their propagation better. These problems will be overcome with the European Solar Telescope.

Why, then, do we want to study them? Sausage waves can transfer energy between regions of the solar atmosphere, and this can heat the gas in those regions. By studying sausage waves more accurately, we hope to understand how the sausage ‘cooks’ the Sun.

The figure on the left is adapted from Keys et al 2018, ApJ, 857, 28. The bottom of the stack is the magnetic field information from the Solar Dynamics Observatory. Above this is an image of a pore taken with ROSA at the Dunn Solar Telescope in New Mexico. The blue box shows the region used to make a zoom of the pore in the image above. Blue contours in the zoom represent the edge of the pore. Above this, the image with white arrows shows the motion of the pore boundary over time, indicating a sausage wave. On the right side, there is a cartoon of a sausage wave with its varying tube shape. Arrows show the expansion and contraction of the pore. Videos of simulated sausage waves can be found here.