The relationship between coronal mass ejections and radio bursts is still not fully understood due to previous limitations of low radio frequency imaging. The EST unprecedented high resolution images of sunspots – where the coronal mass ejections originate- will help study this connection. A post by Dr. Sophie Murray, from Trinity College Dublin. 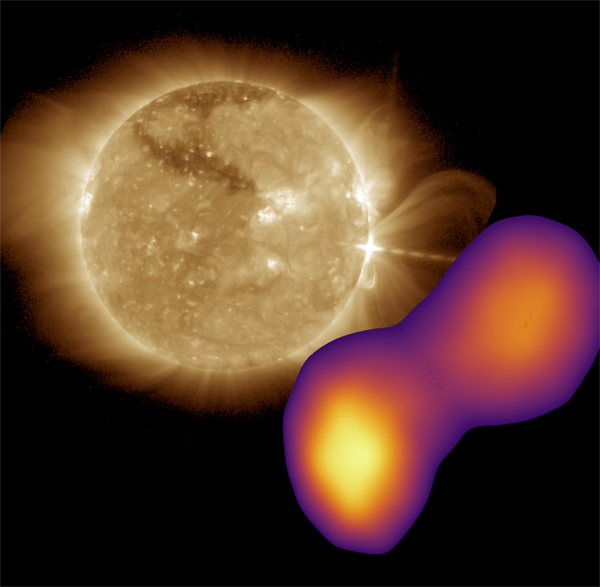 The Sun and a radio burst captured in September 2017 by the NOAA GOES spacecraft and the LOFAR radio telescope. Credit: NOAA, LOFAR.

Coronal mass ejections (CMEs) are spectacular eruptions of billions of tonnes of hot gas travelling at millions of kilometres an hour. If they impact the Earth they can produce beautiful displays of the aurora, but they can also cause disruptions to communications, navigation systems, and power grids. Solar physicists study CMEs to better understand and predict when they might erupt in order to mitigate these potential technological disruptions.

CMEs are powerful drivers of plasma shock waves that can accelerate particles up to relativistic speeds [the speed at which relativistic effects - discrepancies between values calculated by models considering and not considering relativity- become significant, affecting the measure accuracy of the phenomenon being observed]. Research into the solar eruption process has shown that these accelerated particles can produce bursts of radiation at radio wavelengths through plasma emission mechanisms. But we still don’t fully understand the relation between radio bursts and CMEs, partly due to previous limitations of low radio frequency imaging.

A recent study led by researchers at Trinity College Dublin and University of Helsinki used multi-instrument observations of a famous CME event on September 10th 2017 to try to study this relationship in more detail. Radio data from the Low Frequency Array, LOFAR, together with images of the solar atmosphere from NASA, NOAA, and ESA spacecraft, were used to work out where particles are accelerated by the particularly large solar eruption that day.

This state-of-the-art combination of high resolution observations enabled the team to work out that the CME created a huge shock wave as it erupted from the Sun, which then accelerated electrons that generated radio bursts. This gave us an amazingly detailed insight into how solar eruptions work, and may in the future help us to produce more accurate forecasts of when solar radio bursts occur and how they impact the Earth. The video below showcases the CME and propagating extreme-ultraviolet (EUV) wave observed on 10 September 2017. The contours on the left and spectrum on the right highlight the associated radio emission observed by LOFAR, including fine-structured radio shock signatures called herringbones.

The European Solar Telescope will provide unprecedented high resolution observations of sunspots, which are regions on the Sun where these CMEs often originate. Using EST in combination with other instruments observing the Sun to study future eruptions like the September events will further improve our understanding of these phenomena.

An open access version of the Nature Astronomy study can be found here.