Discovering Earth analogues with a little help from our Sun

Discovery of exoplanets depends on a weak radial velocity signal they induce in their host star. Thus, observing solar activity and granulation in its smallest scales, will allow us to better disentangle these signals when occurring in other stars. A post written by Dr. Mihalis Mathioudakis, from Queen's University Belfast (UK). 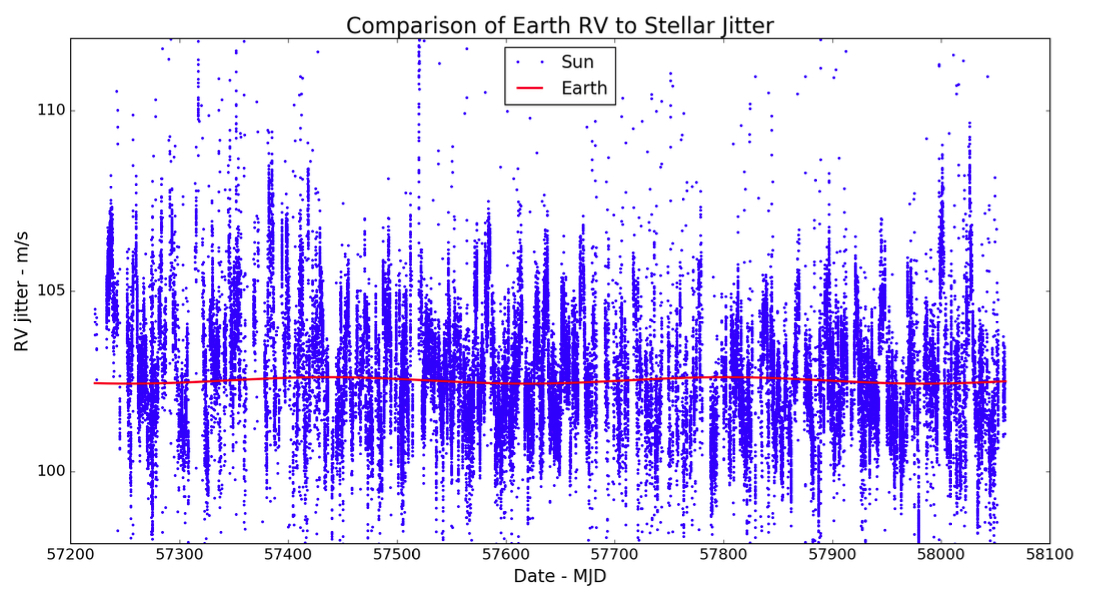 The discovery of exoplanets usually relies on the detection of a very weak radial velocity (RV) signal that the planet induces on the host star. The limiting factor for detecting this Doppler “wobble”, of about 10 cm/s for habitable planets, is caused by the stellar convective motions. Observing and characterising solar activity and granulation in its smallest scales, will allow us to disentangle this RV which is paramount for the discovery of Earth analogues.

The image shows the Doppler “wobble” caused by the barycentric movement of the Earth (red) compared to the RV “noise” induced by solar granulation in sun-as-a-star observations.

The European Solar Telescope  will study the fine structure of photospheric features with very high spatial, spectral and temporal resolution. Combined with state-of-the-art radiative MHD modelling, this will allow us to form a multi-component parameterization of the solar photosphere that includes granules, magnetic/non-magnetic intergranular lanes, magnetic bright points, spots and plages, from disk center to the solar limb. This parameterization can be used to reconstruct stellar line profiles and allow us to “beat” the astrophysical noise caused by the convective motions of exoplanet host stars. The RV jitter caused by the Earth analogues can then be uncovered.