It is established that two different types of magneto-convection are present in sunspots, but their details and the transition between these magneto-convective processes are not yet fully understood, writes Dr. Rolf Schlichenmaier from the Kiepenheuer-Institut for Solar Physics  (Germany). 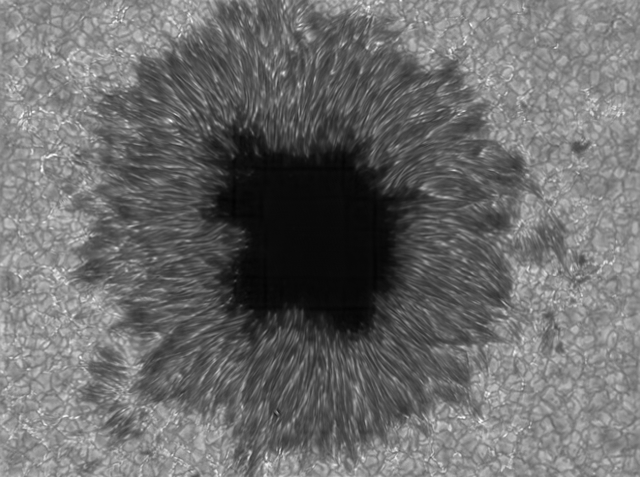 Image of a sunspot and its surroundings taken with the German VTT on 20 May 2016, in the G-band at 430nm. / Credits: Johannes Löhner-Böttcher (KIS)

Sunspots on the surface of the Sun manifest strong magnetic fields that couple the solar interior with its outer atmosphere. They appear dark as they are cooler than the surroundings in which bubbles of hot gas emerge on the surface cool by radiation and submerge in the adjacent cool lanes. In sunspots this convective process of energy transport is strongly altered by the presence of magnetic fields, that is, magnetic forces known as the Lorentz-forces lead to distinct magneto-convective processes.

Sunspots appear with a dark inner area, the umbra, and an outer brighter ring, the penumbra. Hence, it is obvious that two different types of magneto-convection are present, and we still do not understand the details of and the transition between these magneto-convective processes. Yet, recently a discovery was achieved by Jurcak and co-workers (2018, Astronomy and Astrophysics 611, L4): While hitherto the boundary between umbra and penumbra was defined by the fact that the penumbra is much brighter than the umbra, these authors for the first time discovered a magnetic property of this boundary: The vertical component of the magnetic field has an universal threshold value. These authors studied a snapshot sample of 88 sunspots.

In order to challenge this finding, Markus Schmassmann and co-workers at the KIS analysed the temporal evolution of a single long-lived sunspot. We were astonished to find that indeed for a time period of more than 10 days, the vertical component of the magnetic field stayed constant at 1693 G (10000 Gaus = 1 Tesla) with a fluctuation as small as 15 Gauss. Hence, the 'Jurcak'- criterion for the boundary between umbra and penumbra has been established empirically, and upcoming theoretical research will hopefully provide a detailed explanation of how the two types of magneto-convection operate in umbra and penumbra. A detailed observational study of these processes at the inherent small scales will be done with European Solar Telescope  which will provide the spatial, spectral and polarimetric capabilities that are necessary for this task.