How dynamic is our Sun?

The Sun is a Rosseta stone for understanding the physical processes in our universe, write solar physicists Dr. Sowmya Krishnamurthy, J. Sebastián Castellanos Durán and Dr. Andreas Lagg, from the Max Planck Institute for Solar System Research (MPS) in Germany. The future European Solar Telescope will help unveil them. 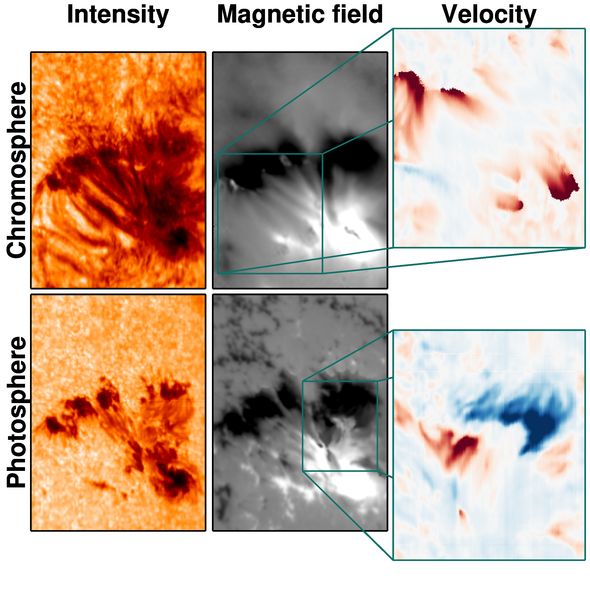 The Sun is a Rosetta stone to understand the diverse physical processes in our universe. Various ground- and space-based observations have revealed that it is a highly dynamic and magnetized ball of plasma. It has an atmosphere, quite different from the one of our planet Earth, with the photosphere and the chromosphere forming its lower layers.

The photosphere becomes visible when looking at a projected image of the Sun. Magnetic fields, generated in the interior of the Sun by the action of a dynamo mechanism, emerge on the photosphere where they appear as dark sunspots or pores (see the intensity image for the photosphere in the attached lower left panel of the image) and bright faculae, forming the so-called active regions. The configuration of the magnetic fields in these active regions is dipolar with the magnetic field vector pointing radially outward (white patches in the magnetic field images shown in the middle column of the figure) and inward (black patches). The average temperature of the photosphere is about 5700 degrees Kelvin, causing the atoms and molecules to be permanently in fast thermal motion. Because of the Doppler effect, the plasma velocities lead to a blue-shift when it is moving towards the observer and to a red-shift when moving away from the observer. This Doppler motion can be measured and is presented as blue and red patches in the velocity images shown in the last column of the figure. Various physical processes on the Sun cause the plasma to move with speeds exceeding the local sound speed, that is, they become supersonic.

The chromosphere becomes visible to the human eye when the solar disk is blocked by an artificial mask or during a total solar eclipse as a narrow, red ring at the solar limb. Astronomical instruments make the chromosphere visible not only at the limb, but also on the disk, by producing narrow-band images in the various spectral lines. A prominent example is the helium spectral line in the near-infrared wavelength regime, presented in the intensity image (top left of the image). The chromosphere is inhomogeneous and less dense, but hotter than the photosphere and is known to host supersonic flows. Some mechanisms responsible for these supersonic motions are linked to the presence of magnetic fields. Studies of the flows and magnetic fields in the solar atmosphere are therefore crucial to decipher the structure and dynamics of the Sun.

The high spatial resolution and multi-wavelength observations of the European Solar Telescope will enable us to see the distribution and the dynamic evolution of matter and magnetic fields in the solar atmosphere in unprecedented detail. This will allow us to understand the intricate coupling between different layers in the solar atmosphere, a necessary prerequisite to investigate basic plasma physical processes, and will present a giant leap for answering fundamental questions in solar physics, such as how the solar corona heats up to several million degrees,  how the solar dynamo produces magnetic fields or what causes the gigantic eruptions of solar plasma into the heliosphere. Fundamental research on these topics, possible with the advanced instrumentation attached to the EST, will be of great relevance for space-weather predictions.