Cool solar ejections the size of the Earth

Surges are solar ejections that can be as large as the Earth -or even bigger- and relatively cool (for solar standards), which makes them a very interesting topic to study. A post by Dr. Daniel Nóbrega Siverio, from Institute of Theoretical Astrophysics (University of Oslo, Norway). 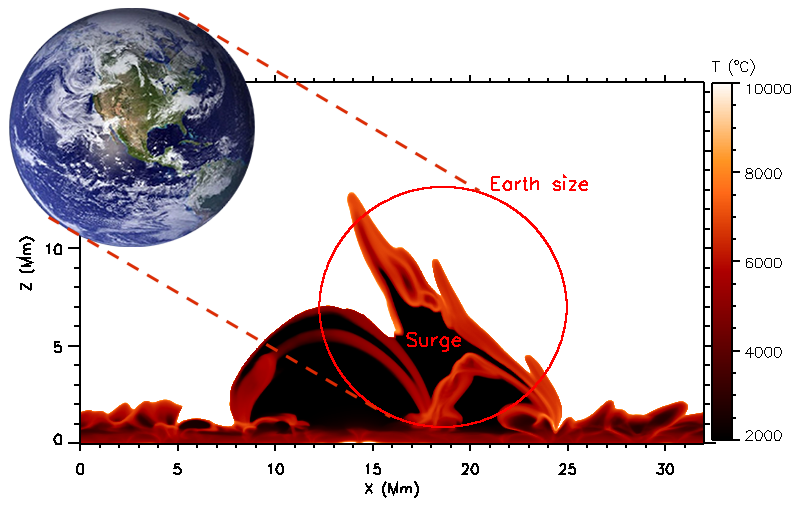 Surges are solar ejections with typical sizes of tens of thousands of kilometers. This implies they are as large as the Earth or even bigger! They are composed of cool plasma but, for solar standards, cool means a few thousands degrees: way enough to melt steel! Moreover, surges are ubiquitous and usually appear in relation to other eruptive phenomena that also perturb the atmosphere of our closest star. This makes surges a really interesting topic to study.

In spite of their huge size, a full understanding of those ejections implies observing the smallest scales in order to unravel them, so how can we achieve this if the Sun is about 150 million kilometers away from the Earth? The answer is the European Solar Telescope: the most ambitious next generation solar telescope. This 4-metre telescope will be the largest one in Europe and will specialize in high spatial, spectral and temporal resolution, together with extremely high magnetic field sensitivity. Thanks to the capabilities of the EST, we will be able to capture the elusive details of the physical processes that lead to surges, thus providing unprecedented quality data to analyze and compare with the state-of-the-art numerical simulations that are carried out in large supercomputing facilities. This will provide a unique joint perspective between observations and theory, helping us to solve the pieces of the solar atmosphere puzzle.

The accompanying image displays a temperature map of a numerical simulation containing a surge - the elongated vertical structure that resembles a fang, located to the right of a dome-shaped structure composed of plasma that has emerged from the solar interior. We have added an image of the Earth to put into context the huge scale of this phenomenon (note that 1 Mm = 1000 km).