ESPN-1: Heating of the solar chromosphere by acoustic waves

The rise of temperature in the solar chromosphere and corona implies heating mechanisms additional to the radiative energy transport. There is no generally accepted picture of the energy transport processes responsible for this rise, and a pure radiative transfer cannot explain the temperature given by semi-empirical models. The scenarios of chromospheric heating processes can be divided into two main competitive categories: (i) Reconnection of magnetic field lines that are oppositely-oriented leads to a conversion of magnetic to thermal energy [1]. (ii) Propagation of waves in plasma, generated by material motions in the upper convection zone. Here, we focus on the acoustic and magnetoacoustic waves. The energy of these waves is dissipated at some distance from the birth point due to the change of atmospheric properties along the vertical direction in a stratified medium [2].

A number of different solar atmospheric models derived from observations or theoretical simulations are used to study physical properties of solar atmosphere from the photosphere to the transition region. We recently introduced a new grid of semi-empirical 1D hydrostatic models (Figure 1), which were obtained by scaling the temperature and column mass stratifications of six initial models VAL A-F [3,4]. This grid describes the solar atmosphere from intranetwork to bright network features, and enables us to scrutinize the hypothesis of chromospheric heating by acoustic and magneto-acoustic waves. These stratifications are used as inputs in our non-LTE radiative-transfer code based on the Multi-level Accelerated Lambda Iterations technique [MALI, 5], which calculates the scaled atmospheric model, the net radiative cooling rates, and synthetic profiles for the chromospheric lines of hydrogen, calcium, and magnesium. A sum of all the contributions to the net radiative cooling rates, computed for each height in the model, are the total radiative losses. 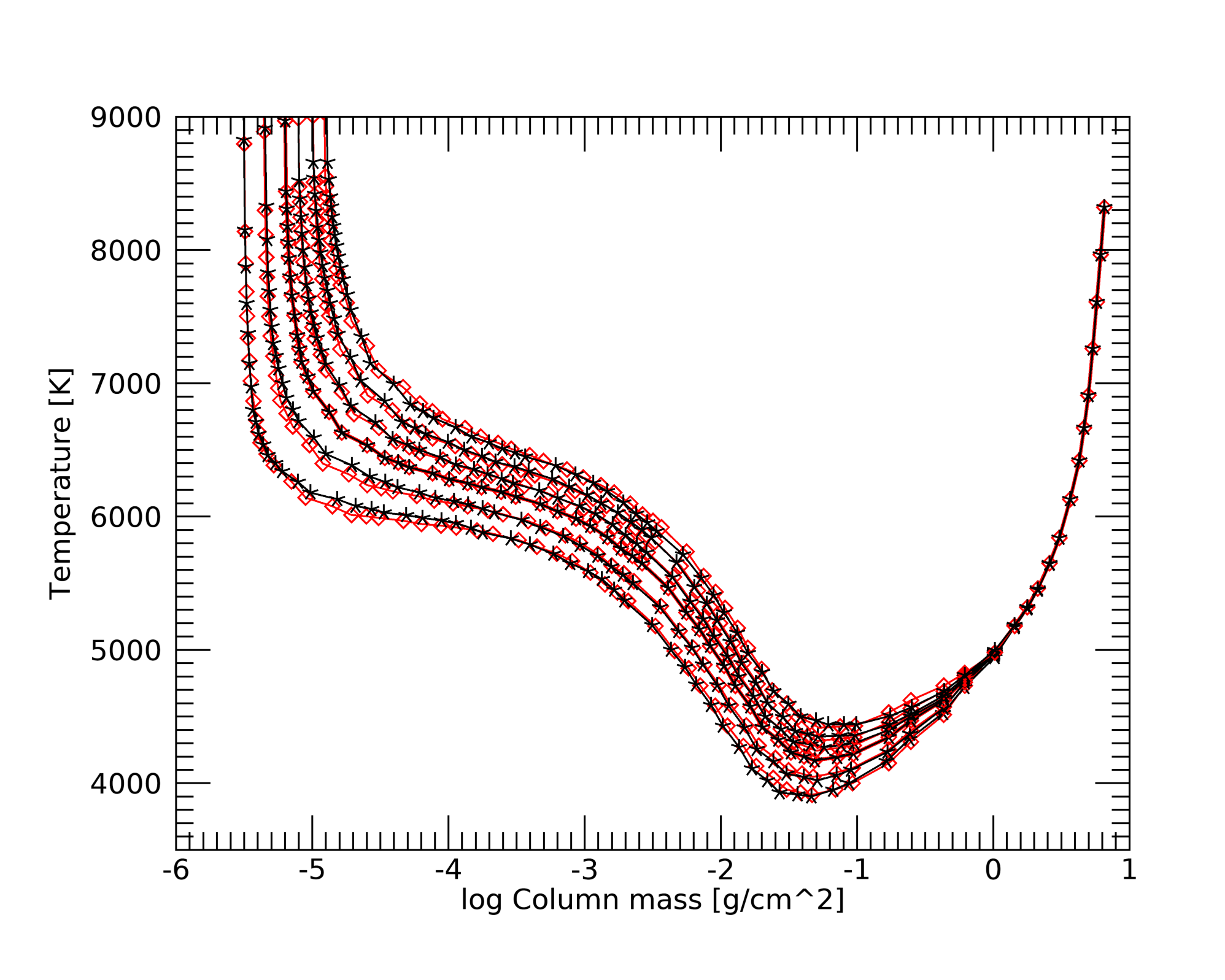 Figure 1. Temperature versus column mass plots of the VAL A-F models scaled from the model C. Red and black lines show the scaling results and the original VAL models, respectively. The symbols denote sampling of the models.

Following the method of Bello González et al. (2009) [6], the acoustic-energy fluxes are estimated at two chromospheric heights at each position of each data set, assuming that the acoustic waves propagate upwards. The presence of inclined magnetic field observed at some locations is taken into account by setting the acoustic cut-off frequency to νac = 5.2cosθ mHz, where θ is the magnetic-field inclination [7]. The acoustic flux is integrated over all observable frequencies above the acoustic cut-off. The acoustic energy flux deposited into the chromospheric layers between the two heights can be defined as a difference between the incoming acoustic-energy flux at the lower boundary and the outgoing one at the upper boundary. The deposited acoustic flux was derived from time series of Dopplergrams measured in the central reversals and at the half-maximum intensity of the emission cores of the Mg II k&h lines and in the line centers and wings of Hα, Hβ and Ca II 854.2 nm.

We examined the heating of the solar chromosphere by dissipation of (magneto)acoustic waves through different layers of the solar chromosphere using data from the Interface Region Imaging Spectrograph, the Interferometric Bidimensional Spectrometer at the Dunn Solar Telescope, the echelle spectrograph attached to the Vacuum Tower Telescope, and the Fast-Imaging Solar Spectrograph (FISS) attached to Goode Solar Telescope spectroscopic. The combination of these instruments provided multi-line observations in Hα, Hβ, Ca II 854.2 nm and Mg II k&h lines. The deposited acoustic energy fluxes were quantitatively compared with the total radiative losses in quiet-Sun and weak active regions in the central zone of the solar disc (Figure 2,3). The calculation of radiative losses was based on a set of non-LTE 1D hydrostatic semi-empirical models assigned to different positions in the regions of interest according to the best match of synthetic profiles to time-averaged observed ones. 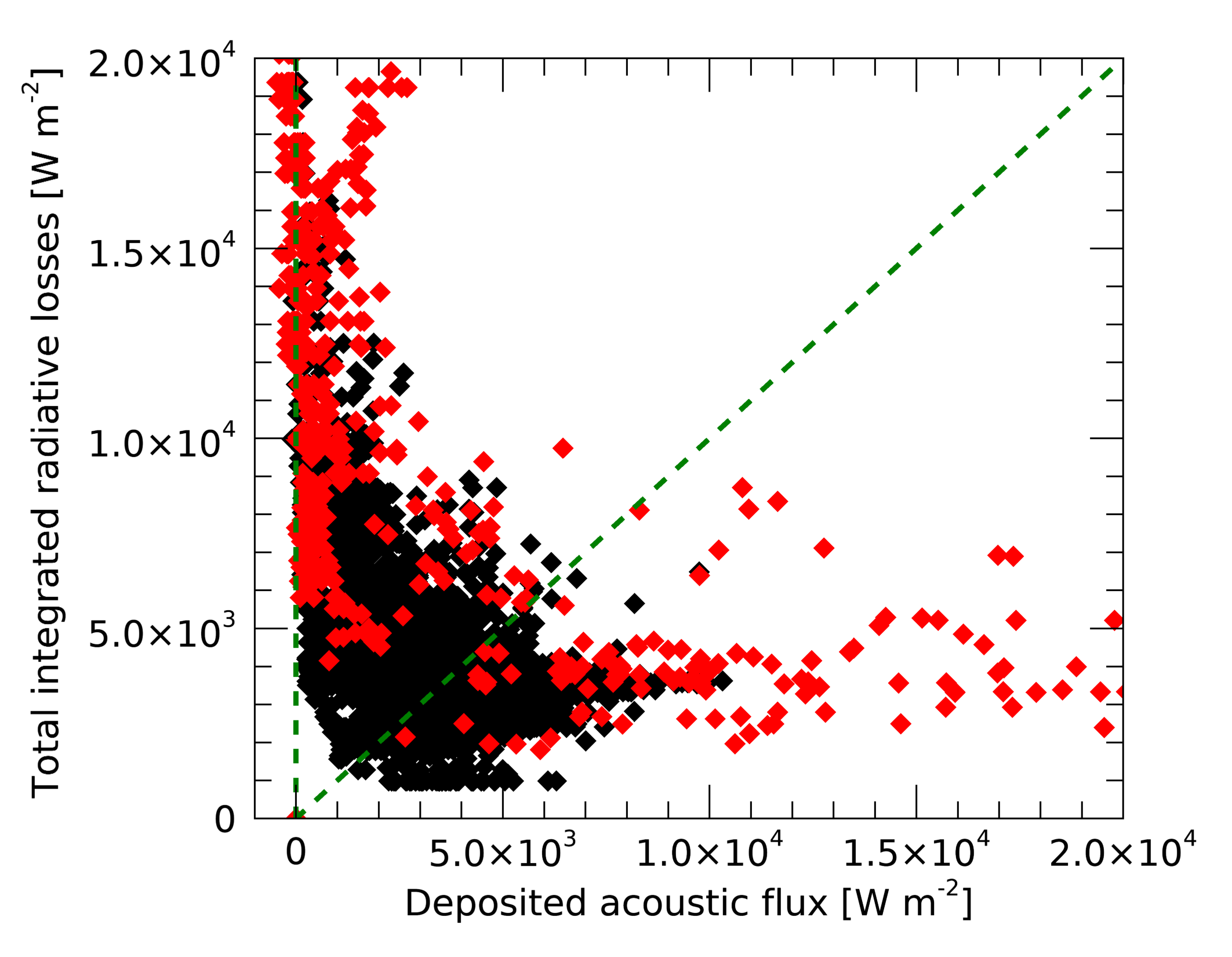 We have shown that the deposited acoustic flux can fully balance the energy released by radiation in quiet-Sun regions between the heights 900 and 2200 km (Fig. 2), particularly in the middle chromosphere (1000–1400 km, Fig. 3), because higher in the chromosphere the deposited acoustic flux is small. A dissipation of supersonic shocks can be a major contributor to the radiative losses [8,9]. We have to remark that these quiet-Sun regions were far from plages and their canopies formed by extended magnetic-field lines. Otherwise, the acoustic energy flux can be reduced by a factor of 2-3 in quiet regions that are close to plages or pores due to the presence of magnetic shadows [10].

Active regions with a strong magnetic field show a small contribution of acoustic waves, where the acoustic-flux deposit balances only 10-30% of the radiative losses in the chromosphere between the heights of 1100 and 1800 km. The deposited acoustic-energy flux is small and decreases with increasing radiative losses. We may speculate about a reduction of the incoming acoustic flux by the presence of magnetic shadows and a different character of waves in magnetic regions, which do not dissipate so efficiently like the supersonic shocks. Definitely, the active-region chromosphere is heated by mechanisms different from the magnetoacoustic waves [8,9].

This work has been published in

The VAL scaled models are stored in the VAL database. The observations were partly supported by the project SOLARNET that has received funding from the European Union Horizon 2020 research and innovation programme under grant agreement no. 824135.